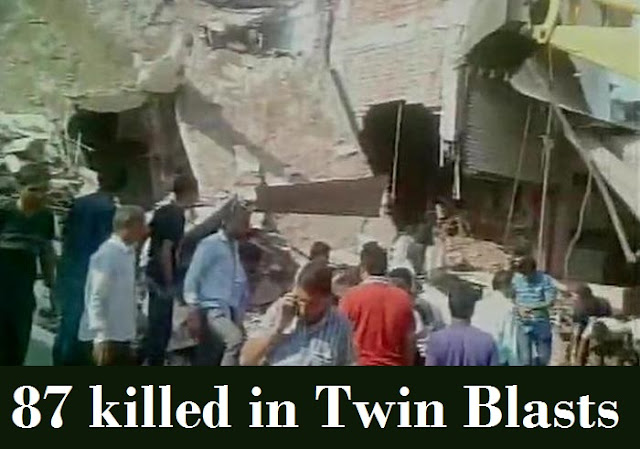 Jhabua (Madhya Pradesh): Eighty-seven people were killed and over 100 injured, 20 seriously, when a cylinder blast at a tea stall packed with customers was followed by a massive blast that ripped through an adjoining building in Madhya Pradesh's Jhabua district Saturday, 12th September 2015, police said.

An investigation has been ordered to ascertain the cause of the second blast that caused widespread destruction. Authorities did not comment on whether illegally-stored gelatin sticks caused the explosion.

"Eighty-seven people are dead, and the bodies of 60 of them have been identified," Inspector M.L. Gaur of the Jhabua police control room told.

"Post mortems of all the bodies has been completed. There are eight women and three children among the dead," he added.

Jhabua, located over 300 km from state capital Bhopal, is a tribal belt and on this fateful Saturday, a large number of labourers were milling around, waiting for buses. 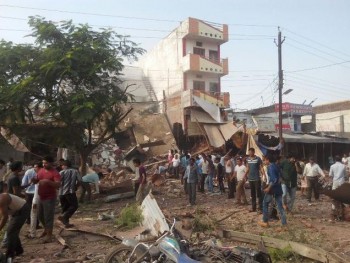 The first blast took place at around 8.30 a.m. in the Petlavad area near the New Bus stand, quickly followed by a much bigger explosion.

The deafening blasts were so powerful that it reduced buildings to rubble and left many bloodied and wounded.

Madhya Pradesh Home Minister Babulal Gaur said: "The blast took place due to gas cylinder explosion."
On whether there were explosives in the building, Gaur said: "The matter needs to be probed and an order in this regard has been given."

A witness said the ear-splitting explosions took place in quick succession, with the first taking place at the tea stall and the second bringing down the adjoining building.

The roar of the explosion was heard for kilometres.

"I heard the blasts and ran towards the spot. Dust hung over the area. Bodies were scattered all over the place. A girl was crying and she was rescued," said Babu Lal, a witness.

Another local said the damage from the explosion at the tea stall was comparatively lesser than the severity of the destruction caused by the second blast.

Dazed locals scrambled to help the wounded, who shrieked in pain. Some of the people died on the spot.
Madhya Pradesh Chief Minister Shivraj Singh Chouhan has ordered a probe.

The chief minister has also announced compensation of Rs.2 lakh each to the kin of the deceased and Rs.50,000 to the injured.
Posted by PARYAYA at 10:26 PM