Chhota Rajan’s Arrest: Is it pre-planned?

Chhota Rajan’s Arrest: Is it pre-planned? 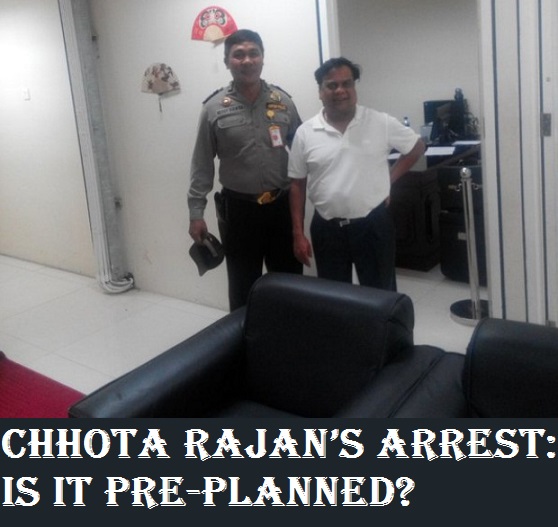 Here is the Report by Quint, glance on it:

'On Monday, the Ministry of Home Affairs and the Central Bureau of Investigation were quick to take credit for Rajan’s arrest. There are indications that the arrest may have been weeks or months in the making. A former officer of India’s external intelligence agency, Research and Analysis Wing (RAW)' tells The Quint

Chhota Rajan’s arrest is a well-planned move. I feel that a deal has been struck between the higher-ups in intelligence agencies and Chhota Rajan. Had we really wanted to arrest Rajan, he would have been arrested years ago, Former RAW officer told o The Quint

The RAW officer further added that, based on Rajan’s inputs, investigators could be planning to prepare a fresh dossier on Dawood Ibrahim, and that this new dossier could be used to bring back India’s most wanted man. Others in India’s intelligence community, however question whether Rajan’s arrest will help in securing Dawood’s capture at all.

Chhota Rajan is not in touch with Dawood at all now. Investigators would ask him multiple questions and questions on Dawood would certainly be among them. But one can’t completely overlook the fact that he may spill out some new information on Dawood says Arun Bhagat, Former Intelligence Bureau Chief.

AS Dulat, another former chief of RAW told The Quint that Rajan’s detention may be “more a surrender than a catch” because “he has been a fugitive for some time and old”. He believes, though, that Rajan will be able to reveal a lot about the nexus between politicians and the underworld.

He will give a lot of information in which we will be interested....more on what the Mumbai underworld is all about, and about linkages. It will be from an insider telling about the past, about people who played some role in the underworld.

Links Between Ajit Doval and Chhota Rajan:
It seems clear that Doval and Rajan have been in touch for years.

On 23 July 2005, Dawood Ibrahim’s daughter’s marriage reception was fixed at the Grand Hyatt in Dubai. Here’s what is believed to have happened:

When Indian intelligence agencies got a tip off, the government sent Ajit Doval to lead efforts to eliminate Dawood Ibrahim. Doval then reportedly got in touch with Chhota Rajan to plan the operation. Rajan is said to have given the task to his two most-trusted sharp shooters, Vicky Malhotra and Fareed Tanasha. Just a few days before the reception in Hyatt in Dubai, Doval reportedly met the sharp shooters at Hotel Ashoka in Delhi. Doval was to provide these two men passports and ID proofs to travel to Dubai.

If all this is true, the most ambitious operation to eliminate Dawood Ibrahim was halted even before it could begin, all due to a turf war between India’s security agencies. The Mumbai Police held a press briefing on these arrests but Doval was quick to deny any involvement.
Posted by PARYAYA at 10:28 PM