Smart City yet to gain momentum!


Smart City yet to gain momentum! 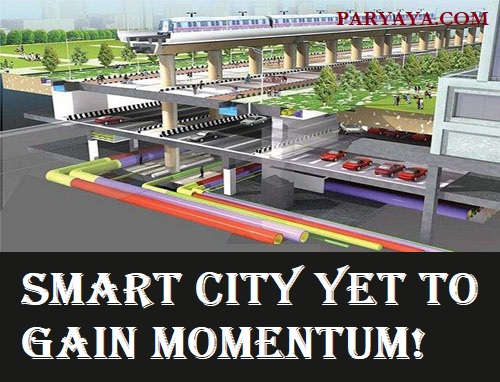 New Delhi: The ambitious project of developing 100 Smart Cities in India launched by Prime Minister Narendra Modi two and half years back i.e. in June 2015, is yet to gain momentum. Smart City Mission is not implemented in several states with expected speed including 7 cities in Karnataka.
Out of the Rs. 9,860 crore released to 60 cities under the Smart City Mission only seven per cent, or about Rs. 645 crore, has been utilised so far, an issue which has raised concerns in the Urban Affairs Ministry.
Of the Rs. 196 crore released to each of around 40 cities, Ahmedabad has spent the maximum amount of Rs. 80.15 crore, followed by Indore (Rs 70.69 crore), Surat (Rs 43.41 crore) and Bhopal Rs. 42.86 crore, according to a data of the Housing and Urban Affairs Ministry. On the other hand, the data revealed that of the sanctioned funds Andaman and Nicobar could utilise only Rs. 54 lakh, Ranchi 35 lakh, and Aurangabad Rs. 85 lakh.
A HUA official recently said the ministry was concerned about the “unsatisfactory” progress of the project in some of the cities. He had said the ministry would approach the cities that are lagging behind to find out the “bottlenecks” with an aim for speedy implementation of the projects.
Among the cities which got around Rs. 111 crore each from the Centre, Vodadara has spent Rs. 20.62 crore, Namchi in Sikkim spent Rs. 6.80 crore, while Salem, Vellore and Thanjavur in Tamil Nadu could utilise only Rs. 5 lakh, Rs. 6 lakh and Rs. 19 lakh, respectively.
Ninety cities have so far been selected by the government under the smart city mission and each of them will get Rs. 500 crore as central assistance for implementing various projects. The cities are required to set up Special Purpose Vehicles (SPV) to get funds from the Centre for the implementation of the project.
In a review meeting recently, the official said cities in Madhya Pradesh, Chhattisgarh, Uttar Pradesh and Bihar were found to be “performing well”, while those in Punjab, Himachal Pradesh, Tamil Nadu, Karnataka and Maharashtra needed to speed up the implementation process.
Hardeep Singh Puri, Minister of State (independent charge) for Housing and Urban Affairs, had earlier this month said the impact of projects undertaken under the scheme would be visible by mid next year. To instill competition among cities and push them for faster implementation of projects, the Centre would also present ‘Smart City awards’ in June next year to well performing cities.
Reviewing the progress of the Smart City Mission on August 30, Prime Minister Narendra Modi had said the challenge before everyone was to ensure implementation and expeditious completion of the work in the 90 identified cities.