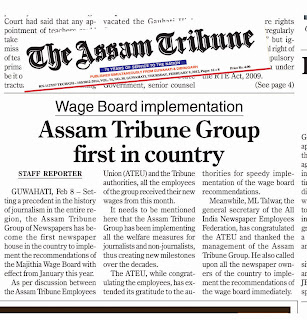 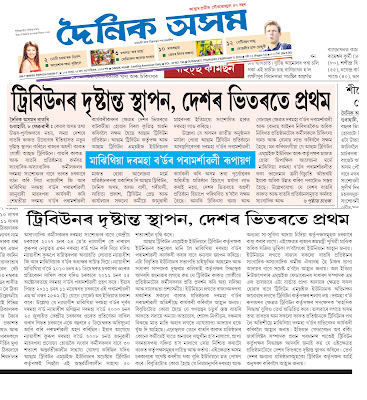 
Pls Go through Letter: (Click the images for larger View)

We on behalf of the Assam Tribune Employees Union (ATEU) would like to thank the leadership of the All India Newspaper Employees Federation (AINEF) and the Confederation of Newspaper and News Agency Employees Organisation for guiding us in the struggle for attaining Majithia Wage Board Award.
Here, we congratulate all our comrades who have taken enough pain together for attaining the wage board, right from the beginning till today. At last, we are glad to draw our pay as per the award given by the Majithia Wage Board w.e.f January 2012. It is a moral victory achieved through workers unity over the years. We salute the united workers’ struggle.
We enclose here with details information towards implementation of Majithia Wage Board in our organization i.e. Assam Tribune Group of Newspapers for favour of kind information.

ATEU has been successful to curve down an anomaly of the Majithia Wage Board while fixation of basic wage structure to some extent, i.e. the difference in basic pay when calculated taking the Basic, DA  and Interim Relief of June 2010 and the Basic Pay ceiling fixed by Majithia Wage Board has been retained as Personal Pay 2 (PP 2) for all employees through bilateral talks with the Assam Tribune Group management. Moreover, the annual increment beyond ceiling has also been waived off for all employees and it will be carried on every year as Personal Pay 1 (PP 1). However, both the Personal Pay 1 and Personal Pay 2 will not be added to the Basic Pay structure while calculating all allowances like DA, Variable Pay, HR, TA, LTC, etc. Moreover, three back increments have been attained even for those employees whose basic wage reached ceiling and has been added to PP 1.

Earlier, ATEU had been successful in getting 30% Interim Relief sanctioned as Government notification from January 8, 2008 which was later increased to 50% through bilateral talks with the Assam Tribune Management due to the  financial crisis faced by sky-rocketing prices and maintained the same till the date of implementation of the Majithia Wage Board Award.

Last but not the least, the ATEU would like to thank the leadership of AINEF and the Confederation for guiding us right from the beginning till attainment of our present goal, i.e., the much needed Majithia Wage Board Award and expect the same in future struggles.