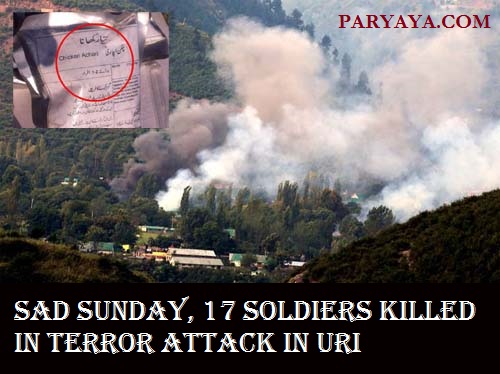 Uri (J&K): In the worst attack on the Army in many years, heavily armed militants suspected to be from Pakistan-based JeM stormed an army base in Uri in Kashmir killing 17 jawans early today, prompting Prime Minister Narendra Modi to assert that those responsible "will not go "unpunished.

Located barely a few kilometres from the Line of Control (LoC) and some 70 km from Srinagar, the base was subjected to the brazen attack by four terrorists at around 5.30 AM, causing heavy casualties in the Dogra regiment which lost 17 of its men. 20 more army personnel were injured, some critically, and were airlifted to the army base hospital in Srinagar.

After the three-hour gunbattle, four terrorists were killed and army was combing to ensure there were no other militants. Most of the army casualties resulted from the fire in tents in which jawans were sleeping.

India reacted strongly to the deadliest attack on the Army in Jammu and Kashmir in a quarter-century-old insurgency that sparked an outrage with Modi strongly condemning it.

"We strongly condemn the cowardly terror attack in Uri. I assure the nation that those behind this despicable attack will not go unpunished," Modi tweeted. 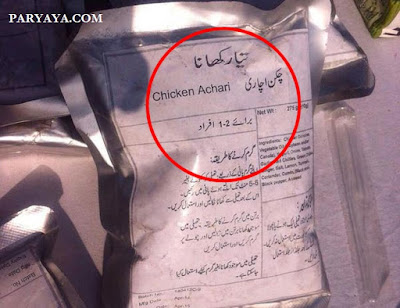 Union Home Minister Rajnath Singh pointed a finger directly at Pakistan, saying it is a "terrorist state" and should be isolated while BJP leader Ram Madhav said days of strategic restraint are over and suggested that "for one tooth, the complete jaw" should be the policy after the attack.

Parrikar was briefed at Army's headqqarters in Srinagar.

The attack at the administrative base of the 10 Dogra, which top Army officials described as a "serious setback", was launched at 0530 hours and ended at 0830 hours with the killing of four terrorists and martyrdom of 17 soldiers.

Explosions and gunfire erupted as the militants attacked the camp, which is located barely few metres away from the Army's Brigade Headquarters in Uri town.

The jawans of the Dogra Regiment were sleeping in a tent which caught fire due the explosion. The fire also engulfed the nearby barracks, official sources said. 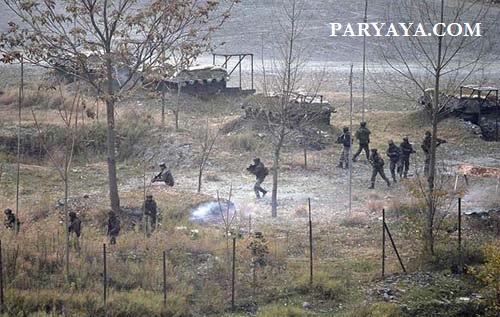