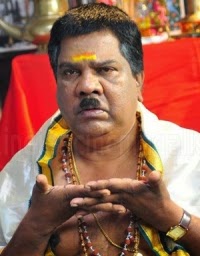 He suffered a cardiac arrest Jan 19 and was hospitalised. He breathed his last at a private hospital in Coimbatore.

A noted theatre personality, Aravindan acted in his first film in 1968. Since then he has been an integral part of the film industry in the state, working in popular films such as "Meesha Madhavan", "Tharavu", "Patalam", and "Thadavara".

He was the president of the AMMA, the association of Malayalam film artistes.

Chalakudy Lok Sabha member Innocent said he first met the talented Aravindan when he was part of a drama troupe in his home town.

"I met him while I was staying in Chennai, trying my luck in films. At that time, he already was an actor. Years passed and we maintained very good relations. I feel his talent was not fully utilised," said Innocent.

Mala is a small, sleepy town near Thrissur. It was the assembly constituency of four time former Kerala chief minister K. Karunakaran.

Mala Aravindan (1941–28 January 2015) was an Indian theatre and film actor. He was best known for his work as a comedian and character artist in Malayalam films.

He was born at Vadavucode, Ernakulam district of Kerala state as the eldest son of Thanattu Ayyappan, an Excise department employee and Ponnamma, a school music teacher. Soudamini, Ramanathan and Prakashan are his siblings.[3] His father died when he was studying at seventh class.[4] Later when his mother got transferred, his family relocated to Mala and he started using the place name as a prefix to his name.

Aravindan started his film career with the movie Ente Kunju, but the film got never released. His second movie was Thalirukal in 1967 in which he acted as a mental patient among many. His first full fledged role was in the 1968 movie Sindhooram, directed by Balakrishnan. Since then he has acted in over 400 films and established his own style which became his trademark. During the initial stages of his career, the Mala-Pappu-Jagathy trio was a guaranteed crowd-puller among Malayalam film audiences.His last film was Lal Bahadur Shastri released in 2014.
Posted by PARYAYA at 10:40 AM