Married the love my life: Shreya announced it to the world..

Married the love my life: Shreya
announced it to the world.. 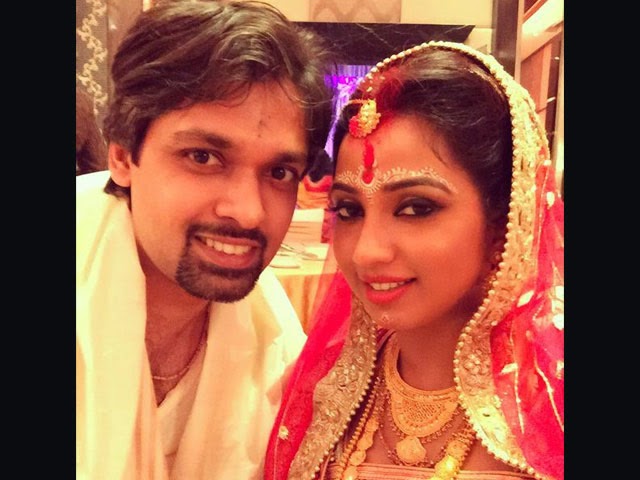 This was her twitter message on, 06th February 2015th, Friday.

Earlier in amother message she had expressed her nervousness over Twitter. Her tweet read, “Don’t know if I’m super nervous or super excited.. Never felt like this b4. Whatever I am up to I will let u know soon;) but need ur wishes.”

These are the messages from playback singer Shreya Goshal.

Yes. Shreya Goshal entered in to wedlock on 5th February 2015 Thursday with Shiladithya Mukharjee, her fiance, who is a digital entrepreneur and co-founder of the app hipcask.

It was private function with the attendance of family members and close friends.

Shreya, the voice behind hit songs from Devdas, Omkara, Parineeta  is a playback singer not only for Bollywood movies. She was a playback singer in several other languages like Kannada, Telugu, Malayalam, Tamil, Bengali films as well as in other Indian languages such as Assamese, Gujarati, Marathi, Oriya, and Punjabi.

Shreya shot to fame with her work in the 2002 hit film Devdas, for which she received the National Film Award for Best Female Playback Singer.

She also won the Filmfare Award for Best Female Playback Singer and Filmfare RD Burman Award for New Music Talent. There was no looking back for the talented singer after that. Her best known work includes Bairi Piya and Dola Re from Devdas, Piyu Bole from Parineeta, Jadu Hai Nasha Hai from Jism, Barso Re from Guru, Ooh La La from The Dirty Picture and Manwa Lage from Happy New Year.
Shreya also posted a photo of herself - dressed as traditional Bengali bride in red, her forehead decorated with sandalwood and vermilion - and her new husband. Shiladitya Mukherjee.
Posted by PARYAYA at 10:18 PM