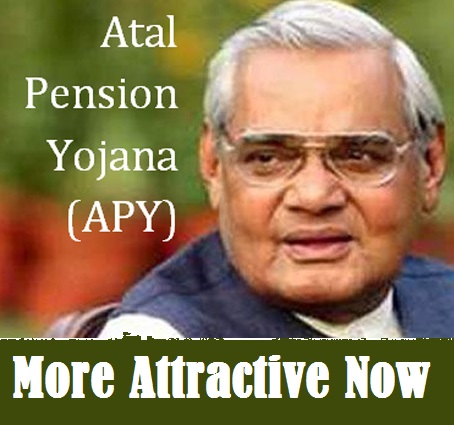 According to Governent notification issued today, 20th August 2015, Subscribers Would Now Have an Option to Make the Contribution on a Monthly, Quarterly, Half Yearly Basis Instead of on a Monthly Basis Earlier; Discontinuation of Payment of Contribution Provision Substantially Modified in Favour of the Subscriber; Penalty on Delayed Payment has Been Simplified

Certain suggestions have been received, including from the State Governments, regarding providing certain relaxations for informal sector workers, having intermittent incomes, from the provision of mandatory monthly contributions under the scheme of APY and also removing the penal provisions for non-contribution under APY to make the Scheme more viable.

The matter has been examined and the necessary revisions have been made in APY to increase the acceptability of the scheme amongst informal sector workers.

The modified provisions carried out in the scheme are as under:

*  The individual subscribers shall have an option to make the contribution on a monthly, quarterly, half yearly basis instead  of on a monthly basis earlier

*  Discontinuation of payment of contribution provision has been substantially modified in favour of the subscriber.  The account will not be deactivated and closed till the account balance with self-contributions minus the Government co-contributions becomes zero due to deduction of account maintenance charges and fees

*  Also the penalty on delayed payment has been simplified to Rs. One (1) per month for contribution of Rs. 100, or part thereof, for each delayed monthly payment instead of different slabs given earlier

*  Similarly, premature exit from the scheme before sixty years of age was not permitted earlier except in exceptional circumstances, i.e., in the event of the death of the beneficiary or terminal disease.  Now the modified provision permits the subscriber to voluntarily exit with the condition that
(a)  he shall only be refunded the contributions made by him to APY, along with the net actual interest earned on his contributions (after deducting the account maintenance charges) and ;
(b) the Government co-contribution, and the interest earned on the Government co-contribution, shall not be returned to such subscribers.
Posted by PARYAYA at 12:01 AM