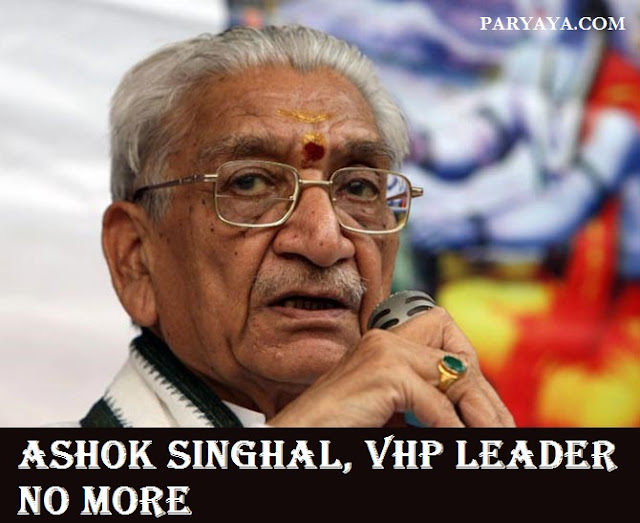 Gurgaon: VHP leader Ashok Singhal, who was one of the key architects of the mass campaign that led to the razing of the Babri mosque in 1992, died here on Tuesday, 17th November 2015. He was 89.

In an acknowledgement of his stature in the Hindutva movement, Prime Minister Narendra Modi called Singhal's death at a hospital here "a deep personal loss" and described him as "an institution in himself".

Home Minister Rajnath Singh, meanwhile, said he "dedicated his life to the nation".

The VHP said Singhal will be cremated at Delhi's Nigambodh Ghat at 4.30 p.m. on Wednesday. "His body will be placed at the Vishwa Hindu Parishad office at Jhandewalan for (people to pay their) last respects."

"He passed away at 2.20 despite our best efforts," the doctor said.

Singhal was admitted to the hospital on November 13 with heart and kidney problems. He was also suffering from breathlessness. He will be cremated here on Wednesday afternoon.

The VHP leader was earlier admitted to the hospital for a fortnight from October 20.

A passionate votary of Hindutva, the Agra-born Singhal, son of a government official, joined the Rashtriya Swayamsevak Sangh (RSS) in 1942.

He worked mainly in Uttar Pradesh, Delhi and Haryana before the RSS deputed him to one of its then lesser known affiliates, the Vishwa Hindu Parishad (VHP), in 1980.

Singhal became its working president in 1984, the year the VHP organised a "Dharam Sansad" (Religious Parliament) which sowed the seeds for the emotive campaign to destroy the 16th century Babri mosque -- that Hindutva votaries said was built at the site where Lord Rama was born.

The year 1984 was also when the BJP bagged just two seats in the Lok Sabha after prime minister Indira Gandhi's assassination.

Singhal's aggressive promotion of the anti-Babri movement made him one of the best known faces nationally, and gave oxygen to the BJP to raise its Lok Sabha tally to 89 in 1989.

Even as the BJP, under L.K. Advani's leadership, came out openly in support of the Ram Mandir movement, Singhal led a massive crowd during the first assault on the Babri Masjid on October 30, 1990.

That bid was beaten back by security forces. But the unrelenting VHP eventually brought down the Babri Masjid in just six hours on December 6, 1992, triggering one of the worst outbreaks of Hindu-Muslim violence.

Unlike most BJP leaders who distanced themselves from the Babri razing, Singhal remained proud of the destruction - and vowed to end, one day, the secular character of the country that he said must be a "Hindu Rashtra".

Critics dubbed him a Hindu fundamentalist and India's Ayatollah Khomeini. But Singhal -- who held a bachelor's degree in metallurgical engineering from the Banaras Hindu University Institute of Technology -- made it clear that issues related to Hindu faith cannot be decided by the judiciary.

At home both in English and Hindi, Singhal was widely respected for his mastery over ancient Hindu scriptures. He was at ease in the company of Hindu ascetics and was a strong votary of the movement to build a grand Rama temple on the ruins of the Babri mosque.

On Tuesday, after Singhal's death, Modi said he was "an inspiration for generations".

"I was always fortunate to receive Ashokji's blessings and guidance. My condolences to his family and countless supporters," Modi tweeted.

Home Minister Rajanth Singh called him "an institution in himself" whose demise left him "saddened".

"Deeply saddened to learn of Ashok ji Singhal's demise. He was one of the leading lights of 'Shri Ramjanmabhoomi Andolanan'," Rajnath Singh tweeted.

"Ashok Singhalji dedicated his entire life in service to the nation and his five decades in social life made him an institution in himself," he added.

Lok Sabha Speaker Sumitra Mahajan joined them saying a "saint like person" has been lost. "It is a huge loss in the social and religious field...."

BJP MP Subramanian Swamy said Singhal brought about "Hindu unity" and "a great change in Hindu mentality". The MP added: "It will be a true tribute to Singhal if (Rama) mandir is built (in Ayodhya)."

VHP spokesman Surendra Jain told : "Singhalji was a great visionary. We will take forward his vision to fulfil his dreams."
Posted by PARYAYA at 11:30 PM