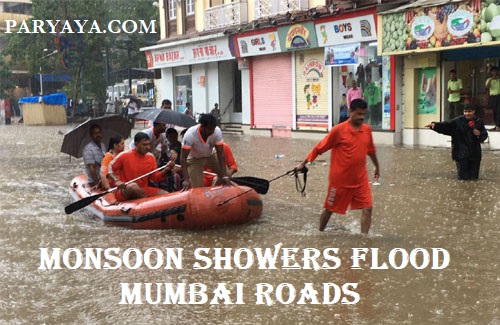 The city has received 75-95 cm rainfall in the last 12 hours. Within 30 minutes of the fresh downpour, roads in several areas, including Mahim, Hindmata and Marine Drive, were flooded. National Disaster Response Force (NDRF) teams have been deployed at various junctions, including at Hindmata, which is the worst-hit.

While two flights have reportedly been cancelled due to bad weather, there are reports of several others being delayed. No trains have been cancelled, but passengers have been told to expect 10-12 minutes delay.
Earlier on Saturday, the India Meteorological Department (IMD) declared the onset of monsoon over Mumbai and warned of "extremely heavy rainfall" along India’s west coast over the weekend. "Monsoon has hit Mumbai, Thane and some more parts of Maharashtra," a Met official said.
The Brihanmumbai Municipal Corporation (BMC), which comes under fire every year for failing to tackle rain-related problems, had claimed that it was prepared this time with precautionary measures in place.

"Leaves of all the senior officials, including Deputy Municipal commissioners (DMCs), Assistant Commissioners (AMCs) and heads of departments have been cancelled and they have been directed to be available in their headquarters on June 9 and 10 (Saturday and Sunday)," it had said.

The BMC said three teams of NDRF would be stationed at Parel, Mankhurd (for eastern suburbs) and Andheri Sports Complex (for western suburbs). They are equipped with walkie-talkies and flood rescue material.

Besides, Navy personnel will be deployed in Colaba, Worli, Ghatkopar, Trombay, Malad for flood rescue if required, the BMC release had said.
As per the IMD forecast, there is a possibility of very heavy rainfall in Ratnagiri, Sindhudurg, Mumbai, Thane, Raigad and Palghar districts on Saturday. There is a similar forecast for the six districts of Konkan region, including Mumbai, and surrounding areas on Sunday and Monday.

The Southwest Monsoon moves from sea to land and remains active from June through September over the Indian subcontinent. It has two branches — the Arabian sea branch and the Bay of Bengal branch — that bring rainfall across India.