Mega widening of Roads at what cost?

Mega widening of
Roads at what cost? 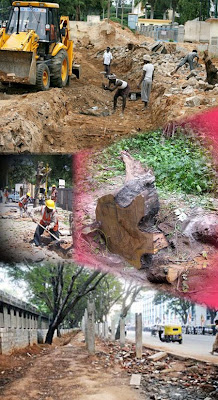 Do we need irrational road widening projects of Bruhat Bangalore Mahanagara Palike (BBMP) which has neglected the safety of Cyclists, pedestrians, senior citizens, children, differently abled and so on apart from axing trees and being implemented in a blatant violation of the law?

Environment Support Group with the support of CIVIC Bangalore took this matter to High Court of Karnataka and the Honorable High Court issued interim direction on constituting an Empowered Committee to review all aspects of the road widening and related urban transport projects and to ensure that implementing agencies comply with law.

As per the directions of the High Court, members of Environment Support Group tried to involve public at large on the issue of widening road projects. But unfortunately, the Empowerment Committee Chair decided not to allow any public involvement in its proceedings, advantaging State agencies to make submissions.

Hence Environment Support Group launched online petition/ representation to the Chair Person and Members of the Committee urging them to involve public in planning and decision making processes and It appealed to all to support this I petition Campaigning by endorsing it.

3. Proper procedures are instituted to conduct meetings in a transparent and publicly accountable manner befitting a quasi judicial forum.

4. Ensure that interests of affected parties is taken into consideration and the constitutionally guaranteed right to fair hearing is secured.

5. Allow Petitioners their due right to engage with the Committee in developing “interim arrangements” to resolve the problems the projects pose as directed by the Hon'ble Court.
We submit this representation in the hope that immediate action would be taken to correct the process of the working of this Committee in order that wider public interest is secured, special rights are particularly protected, and urban greenery is not senselessly lost due to undemocratic, illegal and irrational decision making.
Posted by PARYAYA at 7:40 AM